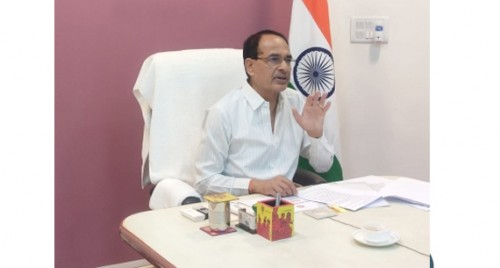 Bhopal, Oct 26 (IANS) The roads, damaged due to heavy rain in Bhopal are filled with numerous potholes, which prompted Chief Minister Shivraj Singh Chouhan to order repairs at the earliest.

In a meeting with senior government officials on Wednesday, Chouhan expressed his disappointment at the condition of the roads in Bhopal and asked the officials to repair the damaged roads within 15-20 days.

The Chief Minister slammed the officials for their careless attitude towards repairing of roads.

"If this is the situation in Bhopal, what would it be in other parts of the state. Why we are showing a careless approach on this important issue. What are the Public Works Department (PWD) officials doing? If they have any problem with repairing roads, they should tell me, but this is not the right approach. Roads should be repaired within next 15-20 days," Chouhan said while instructing officials during a daily review meeting on Wednesday.

This year Bhopal has received heavy rainfall during the monsoon and due to which, along with small roads, some major roads like highways and bridges were submerged in water in several parts of the state. Particularly in the capital city -- Bhopal, roads could be seen with potholes endangering the life of motorists.

Reports suggested that nearly all roads in the city need to be repaired as these potholes are proving dangerous to the motorists.

As per reports, there are more than 1,200 potholes on roads which carries the major part of daily traffic in the city. At least three-four people have lost their lives due to the potholes.

People in the city have been complaining about damage of roads and requesting Bhopal Municipal Corporation and the PWD through social media, however, those requests went in vain. More shocking is that potholes can be found in roads which are even built recently and receive a lot traffic on daily basis. The situation is worse that at several spots, there is compete darkness and potholes on the main road are leading to several untoward incidents.

The Chief Minister's instruction came after he personally experienced the situation while travelling in a particular location of the city.

Chouhan also mentioned that he is fed up with reading news of potholes and damaged roads in the city.

"Why aren't you working on it? coordinate with concerned departments and repair the city's roads as soon as possible. This kind of approach will not be tolerated," the Chief Minister said.

Before Chouhan took cognizance of this issue, one of his cabinet Minister -- Praduman Singh Tomar has announced to walk bare feet until the roads of Gwalior are repaired.

Tomar, who is a loyalist of Union Home Minister Jyotiraditya Scindia and had joined the BJP along with 20 other Congress MLAs in March 2022, would often raise questions on different issues to expose the government of his own party in the state.