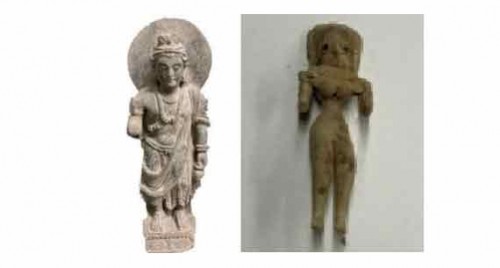 New York, Nov 15 (IANS) New York public prosecutor Alvin Bragg has returned to India and Pakistan hundreds of looted ancient statues and figurines, some as old as 5,500 years, that were brought into the US by a network allegedly masterminded by Subash Kapoor, a convicted antique smuggler.

Bragg's office in Manhattan said that 235 antiquities from India, including many sacred images from temples, had been seized during investigations into the multinational predations of Kapoor across India, Pakistan, Afghanistan, Cambodia, Indonesia, Myanmar, Nepal, Sri Lanka, Thailand, and other countries.

The smuggled items were sold through Kapoor's Art of the Past gallery in Manhattan, the office said.

One of the pieces, a marble sculpture known as the Arch Parikara from the 12th or 13th century, was returned by Yale University Art Gallery which had received it as a donation from a family foundation that bought it from Kapoor.

Bragg said: "These antiquities were stolen by multiple complex and sophisticated trafficking rings -- the leaders of which showed no regard for the cultural or historical significance of these objects."

In recent weeks, the prosecutor has been returning stolen art to the countries that they came from, including Cambodia, Egypt, Israel and Italy.

A total of 307 items valued at about $4 million were handed over to India's Consul General Randhir Jaiswal at a ceremony last month, according to Bragg's office.

The office said that five of the Indian antiquities were seized during investigations into smugglings by Nancy Wiener and her late mother Doris Wiener.

An item seized from them and headed back to India is a statue of Lord Vishnu and Goddess Lakshmi with Garuda from the 11th century looted from a temple in central India, the office said.

Bragg also returned to Cambodia a sandstone statue of Lord Vishnu that had been stolen form a temple and trafficked by Doris Wiener, according to his office.

Another of the items from India was found during investigations into Nayef Homsi and the other 66 were stolen by several smaller trafficking networks, the prosecutor's office said.

During more than a decade of investigations starting in 2011, it said that along with Homeland Security Investigations it had seized more than 2,500 items valued at over $143 million trafficked by Kapoor and his network.

"Kapoor was one of the world's most prolific antiquities traffickers, yet thanks to the work of our dedicated investigators and analysts, we have been able to recover thousands of pieces looted by his network," Bragg said.

Kapoor and five of his accomplices, including Sanjivi Asokan, were convicted by a special court in Kumbakonam in Tamil Nadu earlier this month on charges of stealing sacred images from temples for sale abroad.

Kapoor, who was arrested in Germany in 2011 in an operation known as Operation Hidden Idol and extradited to India, has been sentenced to 10 years.

The prosecutor's office said that warrants are out for Kapoor and five of his accomplices to face charges in New York and Bragg is seeking their extradition.

Bragg returned to Pakistan 192 statues and figurines totally valued at $3.4 million last week and of them, 187 were unearthed during investigations into Kapoor, his office said.

Among them were what are called Mehrgarh Dolls, terracotta figures of the mother goddess estimated to be from 3500-2600 BCE that were looted from the Mehrgarh archaeological site in Pakistan.

Another was a statute depicting a Maitreya form of Lord Buddha, from the Gandharan period, 1000 to 2000 BCE.

The prosecutor's office said that they had been seized from storage units belonging to the Art of the Past gallery.

The Maitreya statute had allegedly been looted and smuggled by the Butt Network of Zahid Parvez and Zeeshan Butt using their family businesses spread across Islamabad, Bangkok, Hong Kong, and Dubai, the office said.

The network supplied the international art market with stolen antiquities from countries including, but not limited to, Afghanistan, Pakistan and India, it added.

Bragg's office said that five co-conspirators of Kapoor -- Richar Salmon, Neil Perry, Selina Mohammed, Aaron Freedman and Sushma Sareen -- have already been convicted by courts in the US.