Rishabh Pant be given the opportunity to open, can go gung-ho in the powerplay: Dinesh Karthik 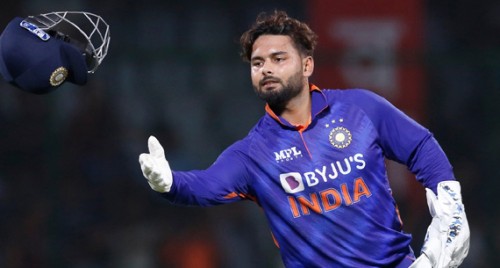 New Delhi, Nov 19 (IANS) 2022 has been a year where Rishabh Pant has been in and out of the T20I side, coinciding with the form being up and down too. In Indias campaign at the Mens T20 World Cup, Pant was brought in for the last Super 12 game against Zimbabwe and semi-final against England, but didn't leave much impact.

Now Dinesh Karthik, the veteran wicketkeeper-batter who was preferred by the Indian team ahead of Pant for the lone keeper's slot since the Asia Cup and till the T20 World Cup match against Bangladesh, feels that the young left-hander be given a chance to open the batting for the side in T20Is as he can be attacking from the word go.

"We know one thing for sure, Rishabh Pant's ability to play shots. And when the field is up, he can go gung-ho in the powerplay so we can give him the opportunity to open. Interestingly, his strike rate is highest when he opens."

"He likes the field up, he likes to take on bowlers and put them under pressure. He is second to none when it comes to stroke play and has baffled a lot of international bowlers of high pedigree. We need to embrace the fact that there will be a few failures from him, but he is a terrific player," Karthik was quoted as saying by Cricbuzz.

Pant is currently a part of the T20I squad for the series against New Zealand, where he's deputy to stand-in captain Hardik Pandya. The left-handed batter opened the batting for India just twice in T20Is this year, coming against England at Edgbaston and Trent Bridge, making scores of 26 off 13 balls and one off five balls respectively.

With India picking Ishan Kishan and Shubman Gill for the three-match series, there remains a mystery over Pant getting a chance to open the batting. Karthik feels that giving Pant the required role clarity in T20Is and a fixed role is the need of the hour for the Indian team management building up to the T20 World Cup 2024.

"When it comes to Rishabh Pant, I think he has sealed his spot in Test cricket and to a large extent in ODI cricket as well. In T20s, he bats in a different position for his franchise and comes in a different spot in the Indian team and they are trying to figure out where to fit him. When you have Virat Kohli, Suryakumar Yadav and Hardik Pandya, where do you fit in a Rishabh Pant?"

"We do need a left-hander, but where do we play him? We know what Kohli does at No.3. Let's not even talk about Suryakumar Yadav, he's the best in the business in the world. Immediately we come down to Pant at No.5. Do we want him to bat there or let see if we can give him the opportunity to open," he added.