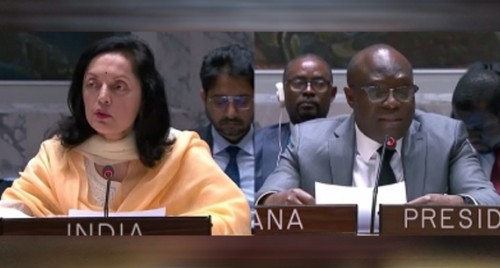 United Nations, Nov 24 (IANS) India has received wide praise for its leadership of the UN Security Council's Counter-Terrorism Committee (CTC) and for guiding the adoption of the Delhi Declaration on fighting terrorists using emerging technologies at its special meeting in New Delhi.

"We welcome the adoption of the forward-looking Delhi Declaration and appreciate that it will serve as a non-binding benchmark for countering the new narratives of terrorists," Security Council President Harold Adlai Agyeman said on Wednesday.

"We thank the chair of the Committee and the government of India for hosting the committee's special meeting in October with a focus on countering new and emerging technologies for terrorist purposes."

The sentiment was echoed by representatives of several countries across the geographic and diplomatic spectrum, who spoke after the CTC chair, India's Permanent Representative Ruchira Kamboj, briefed the council on the committee's work.

The CTC held a special two-day meeting in Mumbai and New Delhi -- a rare session away from the UN headquarters -- where the Delhi Declaration was adopted.

Held on the theme of fighting terrorists' use of new and emerging technologies, the session focused on drones, financing and information and communications technologies, and the declaration set out measures countries should take to counter these developments.

United Arab Emirates (UAE) Deputy Permanent Representative Mohamed Abushahab said the Delhi Declaration "is a crucial contribution to our collective response to the threats discussed during the special meeting, including terrorists' deployment of unmanned aerial systems".

The UAE expresses "sincere gratitude" to India "for ensuring the committee's engagement on a wide range of regional and thematic issues, including evolving threats", he said.

Russia's Deputy Permanent Representative Anna Evstigneeva said the New Delhi meeting of the CTC "was outstanding in terms of organisation".

She said the array of experts at the meeting succeeded "in providing support to tackle the multifaceted tasks on the agenda of the committee and the council as a whole in counter-terrorism".

A delegate representing France said that through the special CTC session in New Delhi India "provided an opportunity to reflect on the evolutions of the terrorist threat".

Thanking India for hosting the meeting, he added: "We were able to collectively reflect on the new ways in which terrorism is being financed (and) this is a priority for France."

A British delegate said that at the CTC meeting in New Delhi, the members "benefited from a wide range of briefers for our work to be effective".

"The perspectives of technical experts, civil society, human rights defenders, the private sector, and academia are invaluable," she added.

Britain "appreciates the focus of the CT committee on emerging technologies", she said.

"The final declaration adopted in New Delhi on October 29 allowed us to flag the recent dangers represented by this threat from emerging technologies being used by terrorists," a delegate from Gabon said.

She thanked Kamboj for her leadership of the CTC.

A Brazil delegate congratulated "India for the successful organization of the CTC special session, a special meeting on the pressing topic of the use of new and emerging technologies for terrorist purposes".