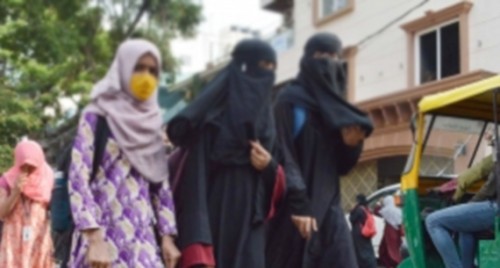 The government is however moving ahead with its decision and has allotted a Rs 2.50-crore grant, sources said, adding that that Chief Minister Basavaraj Bommai is all set to lay down the foundation stone for the colleges this month.

The colleges are going to be built in the Malnad and north Karnataka regions initially, and will expand later, the sources added.

Maulana Shafi Saadi, Chairperson of the Karnataka Wakf Board, said that the proposal for the exclusive colleges was made by the Board and the decision was taken after large number of Muslim girls have opted to stay at home since wearing of hijab is not allowed in college premises.

"The proposal was made to the Union Minister of Women and Child Development Smriti Irani. The delegation was led by Karnataka Minister for Muzrai Shashikala Jolle and Kalaburagi MP Umesh Jadhav," he said.

"The state government has consented to the proposal. I thank Minister Shashikala Jolle who took lead like a sister to ensure, Muslim girls are educated."

However, the development has created a furore in the state.

Maintaining that the decision is against the principles of secularism and the constitution, Gowda warned that "if the government does not revert it, protests would be launched".

Sri Rama Sena founder Pramod Muthalik has challenged that ruling state government against building the colleges, saying it won't be allowed in the state.

"We never thought BJP would indulge in appeasement of Muslims ahead of the Assembly elections. This is a divisive rule and the colleges are opened in the backdrop of the hijab crisis. This would make students develop a divisive mindset," he explained.