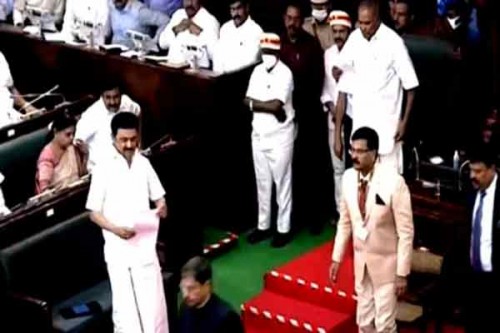 Chennai, Jan 10 (IANS) The ruling DMK is set to politically raise the issue of Tamil Nadu Governor interfering in the functioning of the state government, a senior party leader said on Tuesday.

The Governor skipping a paragraph while reading out his speech in the state Legislative Assembly on Monday has turned into a catalyst for the DMK to raise the issue across the state and to make it a discussion among the people.

While speaking to IANS, the party leader pointed out, "The Governor has been dancing to the Centre's tune and the DMK cannot sit idle when Tamil pride has been insulted by a person who has no knowledge about our legacy and our Dravidian ideology."

Governor R.N. Ravi, while addressing the first session of the state Legislative Assembly on Monday, skipped the paragraph mentioning the names of Dravidian ideologues -- E.V Ramasamy Periyar, Dr B.R. Ambedkar -- and former Chief Ministers -- K. Kamaraj and C.N. Annadurai. While the Governor also skipped reading the name of Kalaignar Karunanidhi, he read it in another line.

Immediately after the Governor's address, Chief Minister M.K. Stalin came out strongly against this and moved a resolution for reading the full text of the written speech that was handed over to the Governor. The resolution was passed and Assembly Speaker M. Appavu read it out.

With the political parties commencing campaign for the 2024 Lok Sabha elections and the DMK aiming for all the 39 seats from the state, the party is planning to take up the campaign against the Governor and target the Union government led by the BJP.