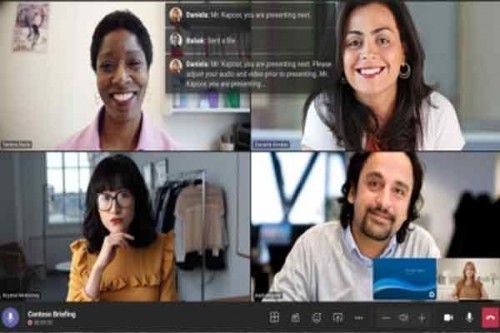 New Delhi, Jan 13 (IANS) Microsoft has announced that it has improved its Teams Rooms on Android with new touch-enabled features including the ability to walk up and use Microsoft Whiteboard, Chat bubbles and more.

Users can leverage all of the new features by updating to Microsoft Teams Rooms on Android update 3, the tech giant said in a statement.

A Microsoft Whiteboard session can be launched with just one touch, allowing for instant collaboration.

Chat messages are displayed as chat bubbles over the current view, which allows in-room participants to engage with the conversation happening in the chat.

With the Touch awareness feature, touch screens allow users to "control the room system from both the touch display at the front of the room as well as the touch console, making it convenient to operate a Teams Room using whichever device is closest to reach".

Moreover, a 4K display is now supported to further enhance the meeting experience on large-screen devices.

The tech giant has also redesigned the share menu because of which content sharing in a meeting is now more accessible.Also, users can now "bring Microsoft Whiteboard into an ad hoc meeting".

Users can seamlessly switch from a local collaboration experience to an online co-creation space by tapping "Start meeting" on the local Whiteboard screen.

"'Start meeting' quickly kicks off an ad hoc meeting and automatically presents the Whiteboard already started on the home screen onto the meeting stage," the company said.