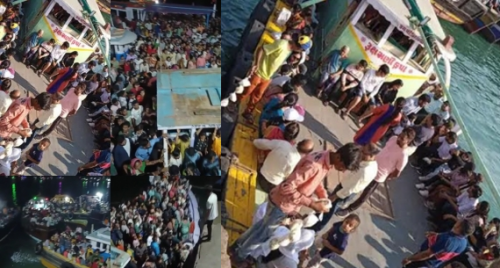 Devbhumi Dwarka (Gujarat), Nov 2 (IANS) After the Morbi bridge tragedy, the Devbhumi Dwarka administration and Gujarat Maritime Board (GMB) officers have suspended the license of 25 boats following allegations that they were ferrying over the permitted numbers.

The boat owners were allegedly ferrying more passengers than permitted or having life jackets on board.

Dwarka Deputy Collector Parth Talsania told IANS, "On regular intervals, the local administration and GMB takes action against the boat owners for violation of norms or regulations, but unfortunately the action taken in the last two to three days is being highlighted because of the Morbi tragedy."

The officer said that in the last two days the GMB has suspended 25 boat licenses for seven days for ferrying more passengers than permission during the festival days. Now the GMB officers are more vigilant, they are permitting passengers against the availability of life jackets on boats.

The sea distance between Okha Jetty and Bet Dwarka jetty is two nautical miles. Around 170 to 180 boats have licenses to ferry passengers between land and the island. On Normal days the rush is less, but during festival days there is a heavy rush and often for profit the boat owners violate norms, "but the officers will be more vigilant", said the officer.